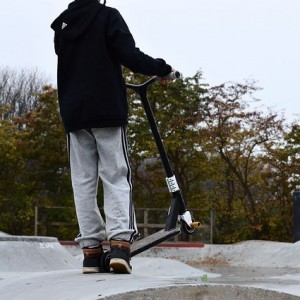 Let’s be honest, riding vanilla for too long can get a little repetitive. Sometimes we just want to let loose and hit up the skate park to show off our awesome scooter skills! Perhaps you are already familiar with the basic tricks such as the bunnyhop and the tailgrab, but these funky new stunts are sure to add a little spice to your arsenal!

In this list we’ll be covering our favorite tricks performed on a kick scooter, so keep reading, and get ready to take notes!

Note From The Editor: Thanks to Razor.com and Lucky Scooters for providing the videos for these stunts.

In this neat trick the rider flips the scooter right the way around 360 degrees before landing back on the deck.

Sure, you’ve seen people do flips plenty of times… But have you seen them do a front flip off of a quarterpipe and land facing the opposite direction? The flair accomplishes just that.

This is a really cool looking trick which is sure to add style points to your moveset. The footplant is performed by exiting a jump and using one foot to make contact with the coping while the other remains on the deck.

This trick takes it’s name from the fact that it resembles a bird of prey flapping its wings. To perform this trick all you need to do is get some air time and reach forward with both hands to grab the front wheel. Much easier said than done!

One of the more iconic yet technically difficult tricks, the full whip involves not only spinning the handlebars or the deck alone, but spinning both a full 180 degrees at the same time.